The site for all of your Pokemon roleplaying needs. Feel free to stay a while, maybe you can catch a few legendaries while your here.

Skip smiled looking up at the tall mountain before him sparky sat on his partners shoulder and looked around. Skip picked up a very light and not full backpack. Being well-prepared for this stuff wasnt skips thing. He lived in way colder and much bigger mountains than this one. Attached to his small backpack were hanggliders of different sizes and weights. His goal...climb to the top and jump! And of course while holding on to a glider! He was tired of being in some stuffy buildings that smelled of books and floorwax...he needed fresh air! Sure there were meadows and forests but he wanted fresh air to breathe and to catch the winds high up in the mountains in hopes of gliding over the campus to get an idea of what his new territory looked like! He really didnt want to go alone though.

Miles took a deep breath, raising his arms above his head to stretch. "AAAAH now THIS is just the right place!" He had decided to let all his pokemon roam free, though they always kept close to him. He knew they were just as starved for fresh air as he was.
Zico, his little angry Charmander, stuck close to Brutus whilst glaring at every single twig, rock, and leaf. Brutus looked like he was having the time of his life, finally back in his natural habitat, little larvitar feet skipping excitedly. Dae, his little dratini, kept himself drooped around Miles' shoulders, occasionally nuzzling his cheek and taking a nap. Sandy was rolling all over the place rapidly, stopping to apologize if she bumped into anyone. Sandshrews... Miles thought with a smirk. Creep was hovering close by Sweetie, an unusually small Ralts, who was very timid and appeared to be frightened by her surroundings. Miles always thought it was so cute how protective Creep was over his little Sweetie.
"Today is a gooood day!" Miles said aloud, his dratini yawning in response. 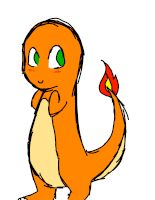 After not seeing anyone around for awhile skip walked on with his multiple gliders hanging from his pack. Disaster stayed right at his heel while Maya perched on his head for a short nap. Unexpectesly he ran into miles again. "oh..hi! What brings you all the way out here?" skip asked walking up behind him. He hoped he hadnt startled him like the first time they met.